Kids will like the little maid Bible craft. Here are some facts found in the story;

An Israelite girl is taken to Syria to help the wife of the commander of the army. The commander was named was Naaman. He had leprosy.

The little maid tells her master about a prophet who could heal Naaman. Naaman sends a letter to the king of Israel asking to be healed. The king becomes upset. Elisha sends a messenger to Naaman telling him what to do. The messenger tells Naaman to wash in the Jordan river seven times.

Naaman becomes angry. But one of Naaman's servant tells him to do it because Elisha is a man of God. So Naaman dips in the Jordan seven times and is healed. The account is in 2 Kings 5:1-27. 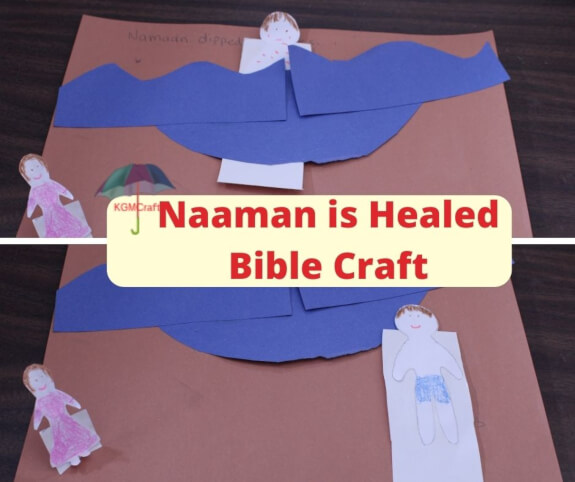 Want to make this craft another day? Pin for latter.

This craft includes the little girl who told Naaman to go to find the man of God.

By the way The Little Maid is a book by Victoria Kovacs. It is available on Amazon. 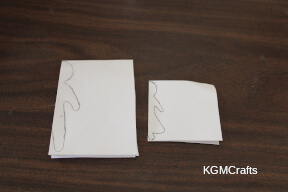 For the maid, you will need a white rectangle 3 by 2 inches. Fold the rectangle in half so that it is 1 by 3 inches. Draw a person wearing a dress.

For Naaman, cut two rectangles 4 by 2 1/2 and draw a man on each rectangle. 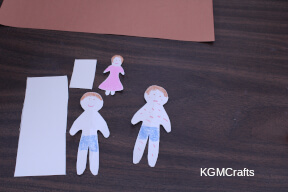 For the maid color the dress. It is easier to color before you cut out the shape. Cut around your lines.

For Naaman color him wearing shorts. On one of the dolls, add some red dots to represent leprosy.

On all of the dolls add hair and facial features.

For Naaman cut a cut a 5 by 2-inch rectangle. 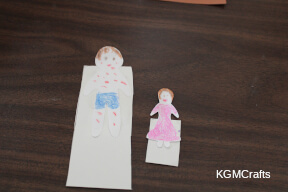 Glue the little maid to the smaller rectangle.

Then glue the doll with the red dots to one side. Glue the other one to the other side. Make sure that the heads match. 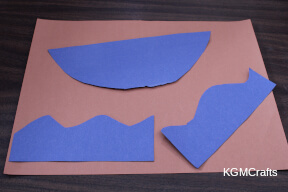 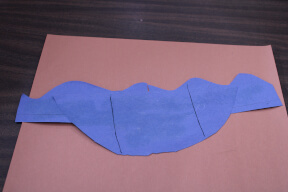 Glue the two waves to the sides of the half-circle so that they meet in the center.

Turn the river over and measure about 4 inches in the center. Do not glue this area.

Glue the sides of the river to the brown paper near the top.

At the top of the paper, add a message about how Naaman dipped seven times. Near the bottom of the page, add the statement that he was healed. 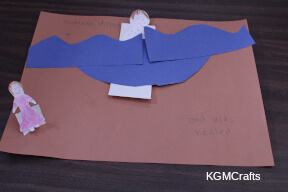 On the brown paper, fold one of the bottom corners up. With scissors, make a small slit. Add the little maid doll here so that she can watch Naaman.

Add Naaman to the center of the river so that you can pull him up and down seven times. 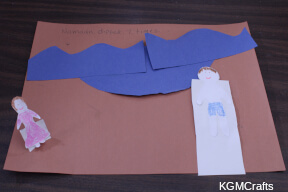 When he is finished washing, turn the doll to the healed side.

The little maid Bible craft can remind children to tell others about God.

Don't want to draw people or make the river your self? Download the free template for the little maid Bible craft! 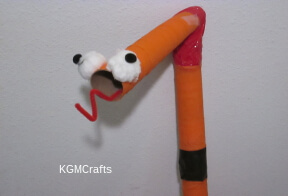 make crafts for the life of Moses 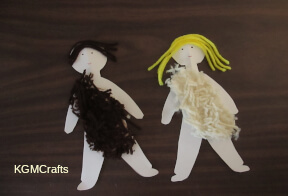 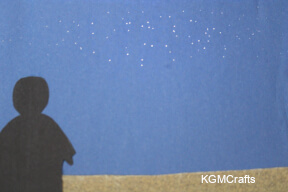