Use these Bible crafts for Gideon to help children remember the story facts.

Click the pictures to go to the individual Bible Crafts for Gideon. 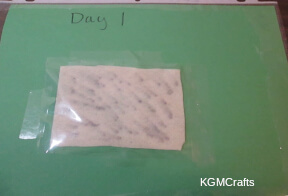 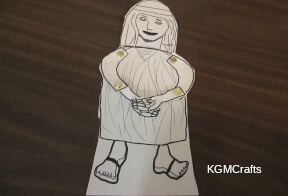 make the men in Gideon's army 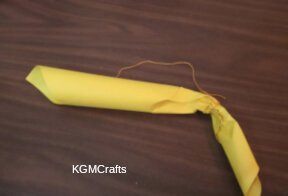 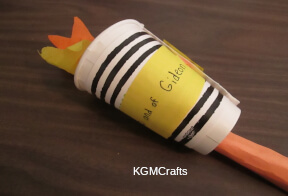 He was an interesting Bible character. The Lord came to Gideon and told him to save the Israelites from the Midianites. He collected an army of only 300 men. With the help of God, he fought the Midianites and saved Israel. 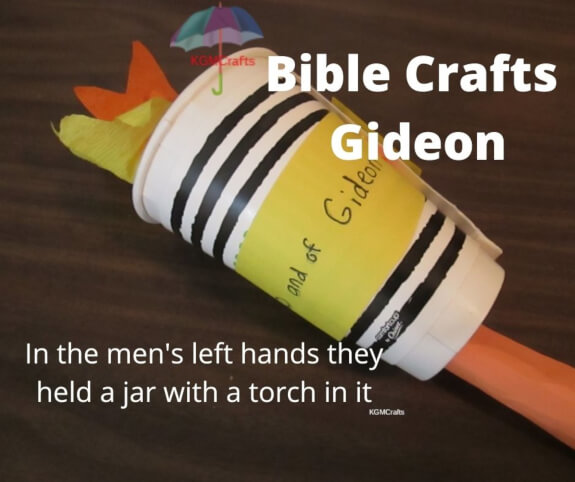 Want to make the crafts another day? Pin for later.

The Wet and Dry Fleece Craft 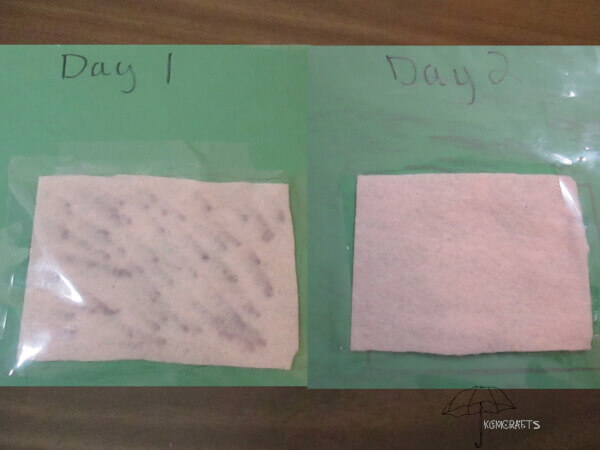 Gideon asked God for a sign. You can find the story in Judges 6 verses 36 through 40. 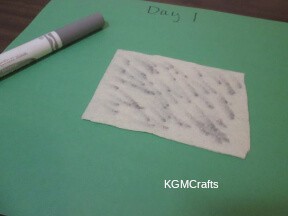 Cut 2 pieces of felt 4 by 3 inches. This will be the fleece.

Cut your construction paper to fit in the plastic sheet protector. With a gray marker, make some marks on one of the felt pieces. 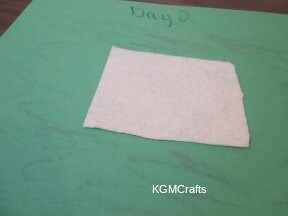 On the paper with the colored felt write “Day 1”  On the other side write “Day 2”.

Also, on day 2 use a gray crayon to make a puddle around the felt. 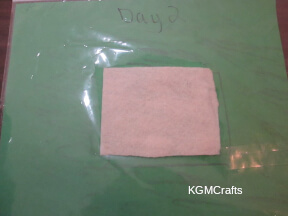 Place the green paper in the sheet protector. Cut around the felt on the day one side. Save the square of plastic. 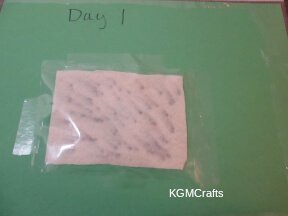 Turn your picture over. And cut most of the sheet protector off the day 2 side.

Take the leftover square of plastic and tape it to the felt with the gray marks. So that it looks and feels wet. 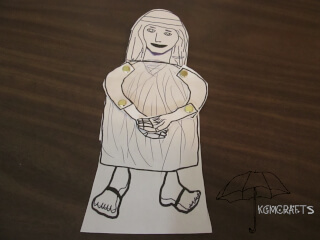 The LORD said that it was still too many. So there was a test. Those who bent their knee and drank from the stream were removed.

300 used their hands and lapped like a dog. These were the men that Gideon and the LORD choose for the army. 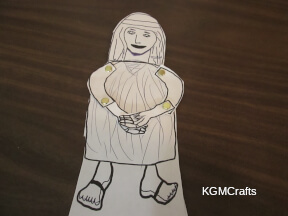 Download and print the PDF. (opens in a new window)

It is optional, but you can color the picture with crayons or markers.

Cut the man and arms out.

With a push pin, make holes for the brad. Using a pushpin helps to make the hole that the brad needs to go through. Attach the arms to the shoulders and at the elbows with brads.

To make the soldier drink, bring the hands up to the mouth.

Bible Crafts for Gideon
How the War Was Won 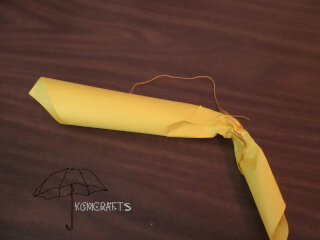 Trumpets during Biblical times were usually made from rams horns. 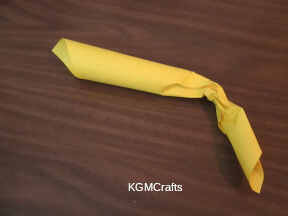 Roll the paper from one corner to the other corner. Roll so that you have one small end and a larger one.

Bend the roll about 5 inches from the smaller end. 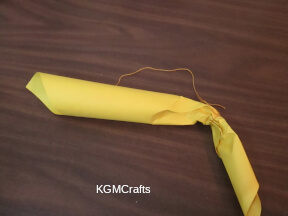 Cut a piece of craft string about 18 inches. Tie one end to the bend.

Poke a small hole near the larger end and tread the thread through. Make a knot in the string. Tape the top of the hole, so the thread will stay.

Torch in a Jar Craft 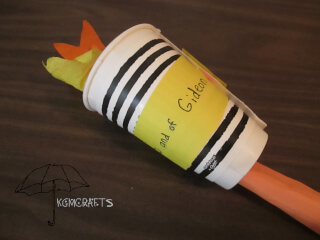 In the men's left hands they held a jar with a torch in it. When Gideon blew the trumpet, the other men were to blow theirs and break the jar.

The Midianites were confused by the noise and killed each other. Judges 7:16-22. 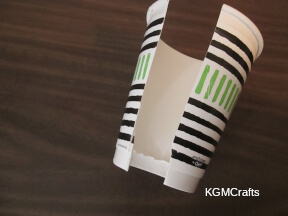 Cut on the seam on the coffee cup. Also, cut out the bottom of the cup.

The jars that were used by Gideon's army were probably made out of some type of pottery. We will use a paper cup so that we should be able to "break" it more than once. 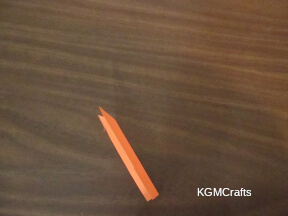 Fold the paper in half. Cut from the fold to the corner to make a pointed end. 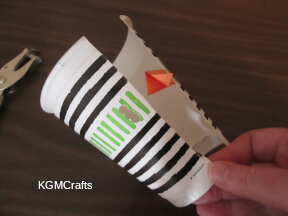 Staple the end that is not pointed to the center of the cup.

With a hole punch, make two or three holes across from the strip of paper you just stapled. You want the “hole” big enough for the paper slit to go through. 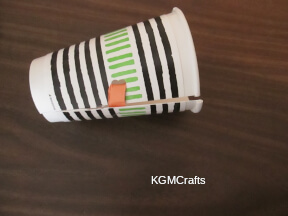 Thread the paper through the hole. 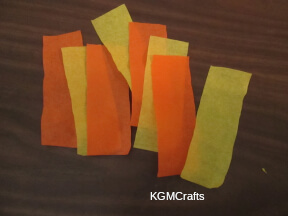 Cut a flame on each piece. An easy way is to stack several pieces, fold in half, and then cutting from the fold to the corner.

Unfold, you should have a “v” shape on the end of each streamer piece. 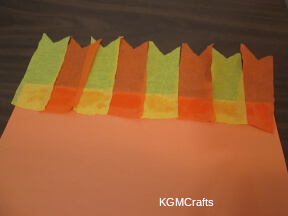 Using a pattern of yellow, orange, yellow, glue the uncut ends to the construction paper. 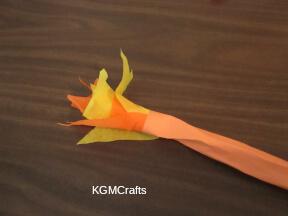 Roll the paper into a tube. 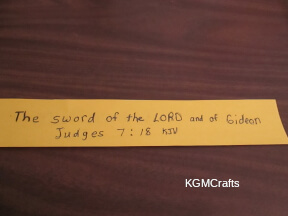 On a piece of construction paper, approximately 2 by 10 inches, write “the sword of the Lord and of Gideon” Judges 7:18 KJV. 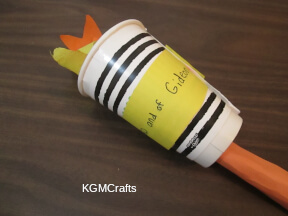 Glue the strip of paper to the cup. Make a slit so that the hole is not covered.

Place the torch in the jar.

You can break the jar by removing the paper strip from the hole in the cup.

While making Bible crafts for Gideon, you can remember that with God, all things are possible. Even when the odds seem impossible. God is truly awesome! 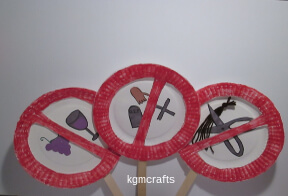 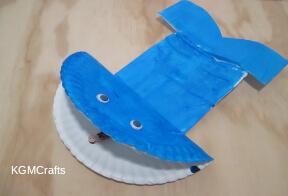 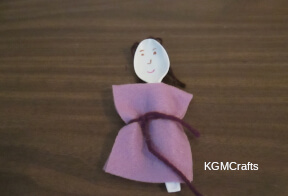